As Seen on TV

They were actually more butter colored. I remembered them as gray. Maybe these are made of butter.

One of my favorite reading materials when I was about five was the back of cereal boxes, many of which contained offers for amazing prizes. Sometimes the prizes came in the cereal boxes, like the small plastic Navy frogmen which, with baking soda added to a little pod on their feet, would rise and fall in a glass of water for several minutes.  This entertained me for hours.

Sometimes we had to send in box tops with a quarter or two taped to a card for a prize.  When I was in first grade, one of my cereals (Cheerios, I think, which is still my favorite) offered a Roy Rogers play set for only 25 cents and two box tops.  Well, acquiring the box tops was no problem since I sucked up Cheerios like an Electrolux. The bigger obstacle was procuring the quarter. My parents would not simply give it to me.  Products of the Depression, they were frugal savers before it became fashionable or necessary for many people.  I had to earn my quarter.  I forget what I did, exactly, since I had few marketable skills as a first grader. Several years later they offered me a penny for every dandelion I dug out of our yard. I think I made about $1 before I have it up as a difficult job that I could do without.  I would rather sit around and read.  I was not what anyone would call an industrious child, but the family work ethic kicked in during high school and hasn’t let up since. As Monk says about his detecting abilities, it’s a blessing and a curse.

Anyhow, once I had the quarter, I had to have an envelope and my mom’s help to write the address and advance me a stamp (about 3 cents then).  Oddly enough, I could read but not write.  I think I figured it took too much effort. I eventually caught up.  Obviously.

My mother quizzed me about why I wanted an envelope and stamp.  I showed her the picture of the Roy Rogers play set in which the figures looked like they could walk off the page. She snorted. “That’s just a bunch of little blobs of plastic.” Certain that I understood all things Roy Rogers better than she,  I persisted until she gave in, saying, “Well if you want to throw your money away, go ahead.”

I taped my quarter to the card and put the envelope in the mail.  For some reason I remember sending away to Battle Creek, Michigan, which is where the Kellogg’s company is located, not General Mills. I probably read that off other cereal boxes. I imagined Battle Creek as a wondrous sort of year-round Santa’s workshop where elves took quarters out of envelopes from children all over the world and sent them wonderful prizes. It made me feel warm inside to think that so much effort went into making children happy.

I waited out the five-to-six week “fulfillment period,” meeting the mailman each day, looking for my prize.  When the box did come, it was tiny.  I took it inside and tore it open and dumped the contents out. The figures of Roy and Dale, Trigger, Bullet and Buttermilk all looked alike. I couldn’t distinguish one from the other.  They were little blobs of gray plastic.

I played with my plastic blobs for a while, pretending I could tell the differences among them. I was a little sad, but realized I had learned important lessons at an early age.  Pictures can lie,  things are not always what they seem, and you have to watch how you spend your quarters. Even where Roy Rogers is involved. 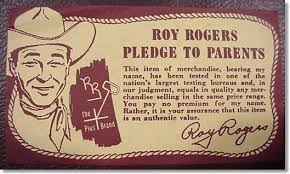 Lies, all lies. Who can you trust? Wait, I know–the government! Oh, wait…