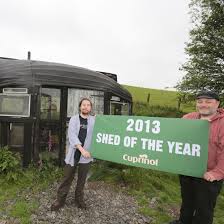 I read with interest a story in the Washington Post Magazine about people who use sheds for purposes other than storing garden tools. They function as studies, pottery studios, and even potting sheds. The movement began in England, where such people are called “sheddies.” One group of gentlemen converted their shed into a pub. Now it does not surprise me that this movement started in England. Let me say quickly that I have the greatest admiration for all things English. I taught English literature in high school for about twenty years and found a beauty and complexity in the writings as well as other aspects of the culture. I could listen to an English accent all day. And don’t forget they gave us the Beatles, (Of course, they also tried to give us cricket, but we’ll overlook that for the moment.)

What I’m leading up to is that Britons probably have more eccentrics per capita than any other nation on earth. I know we have our odd ducks who try to contact extraterrestrials by wearing aluminum foil helmets, but it’s fairly well known that the English lead the pack in this regard.

William John Cavendish Scott Bentick, the fifth Duke of Portland, for example, was a very shy man, who didn’t like meeting people and banned them from his home. He then went further and decided to live underground. He built a series of subterranean rooms, including an underground ballroom was built and a billiard room so big it could house a dozen billiard tables. These rooms and various others were connected by 15 miles of tunnels. One tunnel, a mile and a quarter long, connected his coach house to the local railroad station. That way, he could travel in a blacked-out carriage to the station where his carriage was then loaded on to a railway truck. When he reached his London home in Cavendish Square his servants were sent away as he climbed from his coach and rushed into the privacy of his study.

A Lord Rokeby decided that he would like to spend all his life near or in water. He spent hours in the sea off the beaches of Kent, and his servants often had to drag him unconscious onto dry land. Later, he built a vast tank built with a glass top, had it filled with water and spent nearly all his life floating in the water. He grew the most enormous beard which hung down to his waist and spread out on the surface of the water. All his meals were taken in his pool, to the embarrassment of his family. His obsession with water was so great that he had drinking fountains installed wherever he could and drank great quantities every day. He lived to be 88, so he was a good advertisement for drinking (if not living in) water.

My favorite English eccentric, though, has to be Lord Cornbury, Queen Anne’s cousin. The Queen made him her representative as Governor of New York and Jersey in America. Cornbury took it all very seriously and decided that since he represented a woman, he would dress as a woman. At the opening of the New York Assembly in 1702 he wore a blue-silk gown and satin shoes and carried a fan. He took to wearing the most sumptuous decorated hooped gowns in silk, spending all his money on himself and leaving nothing for his wife. She had to resort to stealing to clothe herself. He was ordered to return to England in 1708 but continued to dress as a woman and managed to remain a favorite of the Queen. Maybe they borrowed each other’s clothes.

Another favorite eccentric of mine is a Belgian man who started dressing as a penguin after his wife told him he walked like a penguin. His house is filled with penguin artifacts, and he often visits penguins at zoos, buying fish for them to eat. At some point he decided he actually was a penguin and began eating raw fish himself.

Anyhow, I don’t think I’ll be writing this from my shed any time soon. It’s dirty and rusty and would need several upgrades (including electricity and A/C) to make it habitable. It’s a nice place to visit to get my garden tools, but I wouldn’t want to write there.