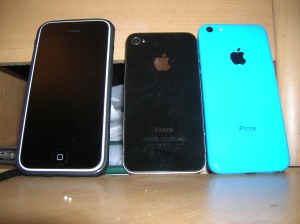 So, why do I have three iPhone 5’s? Let me explain.

iPhone 5 #1 (in the middle) was my first iPhone 5. I dropped it one day and cracked the screen, but I was told that young people prize such damage, so I didn’t have it fixed. I thought it was my best chance at being hip and cool. That didn’t work out well either. Then we went to Dallas in January, and I lost the phone. The nice people at the rental car place called a month later to say that it had been found under the seat of our rental car. We had searched diligently for it, but discovered an important truth: black phones are hard to find under car seats. Maybe they should come in bright colors, like

iPhone 5 #2 (to the right with the robin’s egg blue finish). So, I replaced iPhone 5 #1 and, two weeks later, couldn’t find it. I should add here that I have lost all kinds of things, much like an-eight-year-old (insert your own maturity joke here). I have lost phones, books, e-readers, tools, checks, shoes, shirts, socks, legal documents, cash, cars, girlfriends, my way and credit cards. Most of these are misplaced and generally turn up in good condition unless they have gone through the wash. (I once washed a non-iPhone. Oops. It didn’t work after that although I covered it with rice.) So it was no surprise to me that I misplaced this phone so quickly. We conducted searches of both my cars (I have two in case I lose one), the house, the church, places I’d been and anywhere I might have imagined being. No luck. The blue iPhone 5 had vanished from the face of the earth. So I acquired

iPhone 5 #3. The third time’s the charm, right? Anyhow, today at lunch, Becky came in and pulled iPhone 5 #2 from her purse. It had been under the seat of her car. (Refer to my warning about iPhone 5’s in dark places.) I don’t drive her car that much, but I think I had taken it to have a hard-to-replace bulb done professionally by ace mechanics Logan Hysmith and Bob Hannum of Logan’s Service Imporium (they really are phenomenal. And funny? Oh, yes they are). It slipped quietly from my pocket and went to a better place for a while.

Anyhow, as talented as I am, I can’t use three phones at once although I tried. I saw a movie once about stockbrokers who consistently used two phones at once, but their phones weren’t  iPhone 5’s and the stockbrokers  were crazy. I’m not yet, but if I keep on losing iPhone 5’s, I might be. I’m just glad my boys are all safely home now. We’ll pop some popcorn this evening and watch Party Line. Now, that’s a good time.