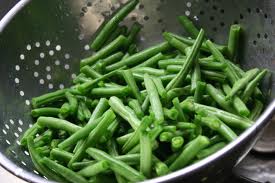 I would like to be a better cook, but I don’t stand a chance. I am part of a family of phenomenal cooks, including my wife, my mother-in-law, my sister-in-law, and my daughters. When it comes to special family meal occasions, they do the heavy lifting and I am consigned to making the iced tea and rice (Uncle Ben and I are tight like that). I can make a few things, but at this point I don’t think I will ever achieve Paula Deen or Rachael Ray status.

There are even specialities within the family menu: my mother-in-law makes wonderful deviled eggs; my sister-in-law does incredible rolls and baked products; my younger daughter has a deft touch with a taco dip; my older daughter has green bean casserole (GBC) all tied up; and my wife fixes green beans that could serve as a meal by themselves. Recently she ran into a time crunch before a family meal and asked me to snap the beans. I was excited to be asked to be part of a signature dish. I cut the ends off the pile of beans and then broke them into pieces. I am here to report that beans, or at least the ones we used, do not have the strings they used to. The agronomists have done some good work over the years. Back in the day you ended up with a piled of bean strings as big as the pile of beans. And they were tough enough to weave a rope that Indiana Jones could use.

While I was snapping the beans I found I soon fell into a rhythm that was comfortable and familiar. Then I remembered all the times my mother asked me to help her string beans. It was not my favorite chore–in fact, I didn’t have any favorite chores since I was a lazy slug and preferred reading and watching television. So I would reluctantly string the beans, missing enough that my mom had to go back through then. When I broke them up, I broke them into large pieces that would take less time. Again, she had to redo them. It’s a wonder she asked me to help. Maybe she was thinking I would catch on. I’m pleased to report that I did, decades later, and can break beans with the best of them.

Sometimes we learn from our parents in ways we’re not even aware of later on. My love of poetry and music came from my mother. She would walk around the house reciting poems she had memorized, Tennyson and Browning mostly, and I ended up majoring in English (with more poetry classes than anything) and teaching English for over 30 years. She also sang as she worked in the house or the garden, and music has been an important part of my life from the days of teaching myself to play guitar to currently being in four musical groups. She was also an inveterate reader, as I am.

Of course, not all of her interests took. She was a master gardener, and I can’t make anything grow. Gardening always seemed like hard work to me. I know, there are rewards but I can’t seem to get to them. A number of years ago I told her I was considering putting in a vegetable garden. She looked at me and said, “Just go to the farmers’ market instead.” She knew.

I never thanked my mother as such for these interests that she gave me, but I believe she understood without my saying how much they meant to me. She wasn’t much on expression through words or overt recognition. She didn’t care at all for Mother’s Day, thinking it was a false and extravagant occasion. She said, “Everyone is nice to their mothers on Mother’s Day and mean to them the rest of the year.” I told her I would be mean to her on Mother’s Day and nice to her the rest of the year. I always saw her then or if I couldn’t, I’d call her and tell her I was doing so because that’s what you were supposed to do on Mother’s Day.

So, with these thoughts in mind, I hope you will express your thanks to your mother for all she has done for you if you are able. If you do not have a good relationship with your mother, I hope there was someone who acted as a mother for you. If you are unable to tell your mother in person, I hope your memories of her are good and strong. And to all you moms and all you women who have acted as moms, thank you.

6 responses to “Fixing the Beans”