From “Pip” Ballantine about  becoming a writer. Pip and her husband Tee produce some terrific steam punk work. 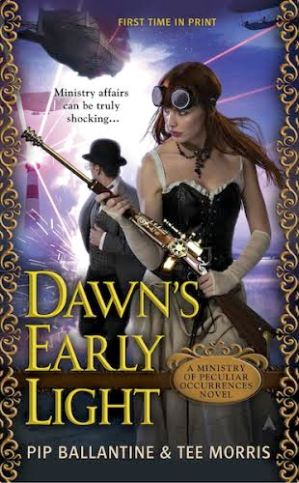 This April will make four years since I made the jump from full time corporate librarian into the world of full time writing. Even now, just writing those words makes my heart leap a little.

It wasn’t an easy road, but it had reached the point where I had to make the choice to believe in myself or give up my dream entirely.

I always wanted to write, though back when I was thirteen years old scribbling in a green notebook it seemed like an impossible dream that I could make my living at it. I was born and lived in New Zealand for most of my life, and although my country was full of creative people, back then there was not much of a market for writers. The only way to make real money at it was to sell to that huge market place half a world away, America. So I put my dreams on the backburner, and pursued my love of books in another direction, working in libraries.

I loved it, but in the back of my head that itch to write was still there. I pushed that urge away for many years, until in 1997 when I had a chance to reorganize my life, and decided to see if I had a novel in me. So I pursued it as a hobby, but eventually got my first professional sale in 2002, and my first contract with Penguin’s fantasy imprint Ace for two books in 2009.

Writing began to eat up more and more of my time, and I was lucky enough to have an understanding boss at the library who wanted me to spread my wings. So she let me go down to working only four days a week. A whole day of writing was total bliss to me, and I could hardly believe I was doing it. It really helped me get more done, and I found myself writing Friday to Sunday as the words poured out of me.

I already had a two book deal, but they wanted more from me. With a dreadful but excited feeling I knew in the pit of my stomach that the time had come. I crunched the numbers, looked at what I was living on, and decided that I had enough savings to cushion the first few lean months.

I told my friends and family that now was ‘the time for me to back myself.’ This put up or shut up moment—one that I had never seen coming—was finally here. I handed in my notice, and as my fellow librarians hugged me and wished me well, realized this wasn’t a dream…I was actually doing it.

Only months after that, I signed a contract with my co-writer (one day soon to be my husband) for another two books series, that was the Ministry of Peculiar Occurrences. The Books of the Order ran four books, and the Ministry series is about to have the third book come out.

Sometimes it still doesn’t seem real, and sometimes it is as frustrating as a regular corporate job, however it feels like what I was meant to do—and that is a very rare and precious thing to me.

Thanks to Katherine for hosting it on his site. Don’t forget to check out Write by the Rails, which is full of a diverse range of amazing writers. You can find out more about the Ministry of Peculiar Occurrences at our site, and me here.